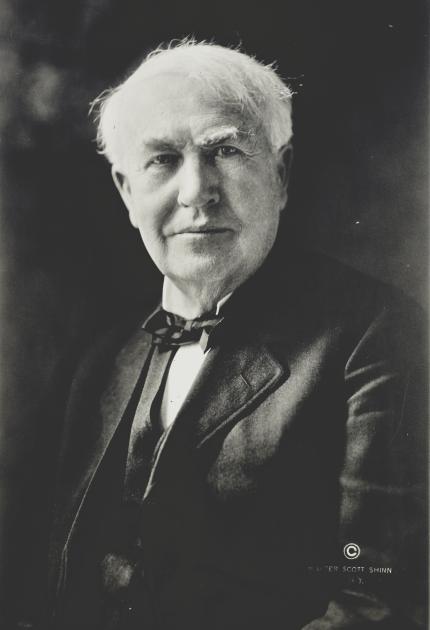 One of the outstanding geniuses in the history of technology, Thomas Edison earned patents for over a thousand inventions, including the incandescent electric lamp, the phonograph, the carbon transmitter, and the motion picture projector. He also created the world's first industrial research laboratory. Born in Milan, Ohio, Edison was an inquisitive child. He found the study of chemistry and the production of electrical current from voltaic jars especially absorbing and soon operated a homemade telegraph set.

In 1868, he borrowed a small sum from an acquaintance, and became a freelance inventor, taking out his first patent for an electrical vote recorder. In 1869, Edison was called to try to repair a telegraphic gold-price indicator on Wall Street. This he did so expertly that he was given a job as its supervisor. His work gained notice, and soon he found himself with enough money to manufacture stock tickers and high-speed telegraphs.

In 1876, Edison set up a laboratory in Menlo Park, New Jersey, where he could devote his full attention to invention. He promised that he would turn out a minor invention every ten days and a "big trick" every six months. He also proposed to "make invention to order." Before long he was applying for as many as 400 patents a year. In September 1878, after having viewed an exhibition of 500-candlepower arc lights, Edison announced he would invent a safe and inexpensive electric light to replace gaslights in millions of homes; moreover, he would accomplish this by a different method of distribution than used for arc lights. Leading financial figures joined with Edison to form the Edison Electric Light Company, the predecessor of today's General Electric Company. On October 21, 1879, Edison demonstrated the carbon-filament lamp, supplied with current by his special high-voltage dynamos. The pilot light-and-power station at Menlo Park glowed with a circuit of 30 lamps, each of which could be turned on or off without affecting the rest. Three years later, the Pearl Street central power station in downtown New York City was completed, initiating the electrical illumination of the cities of the world. In 1887 Edison moved his workshop from Menlo Park to West Orange, New Jersey, where he built the Edison Laboratory (now a national monument), a facility 10 times larger than the earlier one. In time it was surrounded with factories employing some 5,000 persons and producing a variety of new products, among them his improved phonograph using wax records, the mimeograph, fluoroscope, alkaline storage battery, dictating machine, and motion-picture cameras and projectors.

During World War I, the aged inventor headed the Naval Consulting Board and directed research in torpedo mechanisms and antisubmarine devices. It was largely owing to his urging that Congress established the Naval Research Laboratory, the first institution for military research, in 1920.