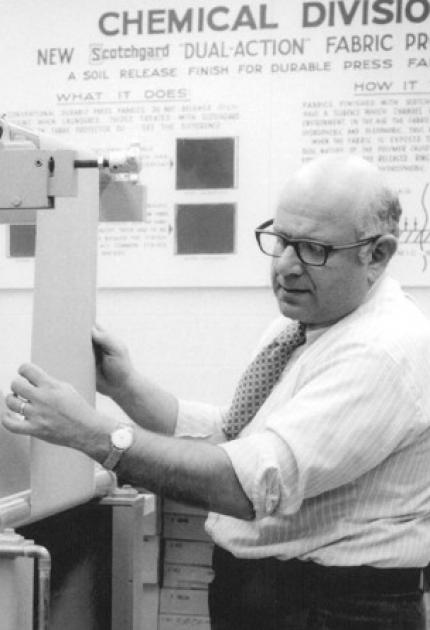 Samuel Smith and Patsy Sherman collaborated from 1954 to 1972 in the chemical research that resulted in the birth and growth of 3M's family of Scotchgard™ textile protector finishes. These materials were fluorine-containing polymers that made textiles repellent to water and oil-borne stains. Additionally, carpet-treating formulations were developed to combine stain repellency with improved resistance to soiling by foot traffic.

By 1967, permanent press fabrics had become popular for many uses. These fabrics became notorious for their retention of oily stains, even through multiple cleanings. Smith and Sherman thought that a polymer in which water-loving segments were joined to specific water-repelling segments based on fluorochemicals might offer a solution to this problem. They then devised the intricate chemistry that allowed these different segments to be joined together. Permanent press treated with these products resulted in perfect oily stain release in a single wash.

Born in New York City, Smith received a B.S. from City College of New York in 1948 and an M.S. from the University of Michigan in 1949. He joined 3M in 1951 and retired as a Corporate Scientist in 1992. He held 30 U.S. patents and in 1988 won the American Chemical Society's Award for Creative Invention.