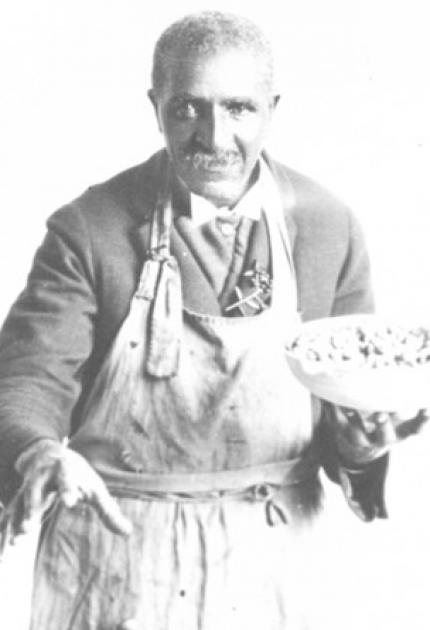 Agricultural chemist George Washington Carver developed crop-rotation methods for conserving nutrients in soil and discovered hundreds of new uses for crops such as the peanut and sweet potato.

Born of slave parents in Diamond Grove, Missouri, Carver received his early education in Missouri and Kansas. He gained acceptance to Simpson College in Indianola, Iowa, in 1887 and in 1891, transferred to Iowa Agricultural College (now Iowa State University) where he earned a B.S. in 1894 and an M.S. in 1897. Later that year Booker T. Washington, founder of Tuskegee Institute, convinced Carver to serve as the school's director of agriculture. At Tuskegee, Carver developed his crop rotation method, which alternated nitrate-producing legumes such as peanuts and peas with cotton, which depletes soil of its nutrients.

Following Carver's lead, southern farmers began planting peanuts one year and cotton the next. Although the peanuts were used to feed livestock, large surpluses quickly developed. Carver developed 325 different uses for the extra peanuts–from cooking oil to ink. When he discovered that the sweet potato and the pecan also enriched depleted soils, Carver found uses for these crops as well.

Upon his death, Carver contributed his life savings to establish a research institute at Tuskegee. His birthplace was declared a national monument in 1953.