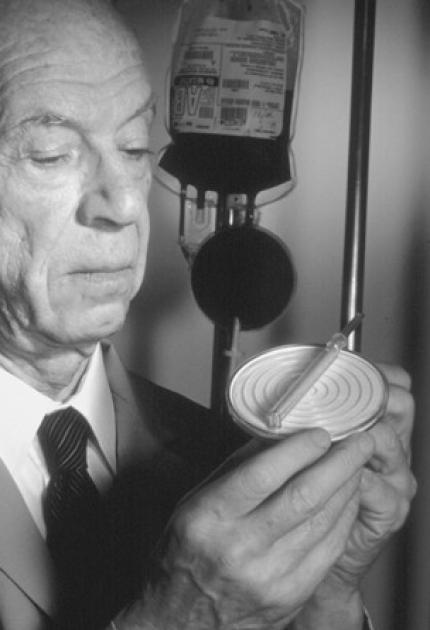 David Pall received over 181 patents in the field of filtration. Among his most important inventions was a leukoreduction filter which makes blood transfusions safer.

Born in Thunder Bay, Canada, Pall decided to be a chemist when he was 11. He graduated from McGill University in 1939 with a B.S. degree and a Ph.D. in physical chemistry. During World War II, Pall helped develop a filter critical to the Manhattan Project. In 1946, he set up what would become Pall Corporation in a Queens, New York garage to commercialize his filtration knowledge.

In the late 1950s, oil filters on automobiles were also on passenger jets. Planes were grounded after the landing gear failed on several commercial flights due to contamination. Pall created a woven metal filter that removed the impurities jamming the hydraulics. He later developed a filter to purify jet fuel. His company became the leading supplier of aerospace filters.

Pall turned to transfusion medicine when he learned his wife's body would eventually reject the blood transfusions she needed to live. He developed an in-depth understanding of human blood, and invented the leukocyte reduction filter that has raised the standard of care for patients around the world.