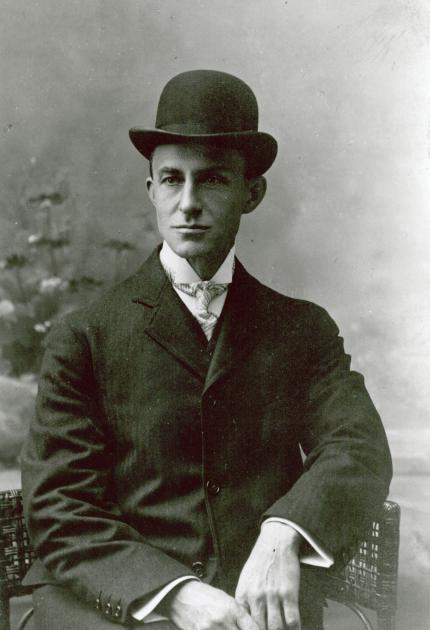 Orville and Wilbur Wright, American inventors and aviation pioneers, achieved the first powered, sustained, and controlled flight of an airplane. The Wright brothers are considered inseparable in their aeronautical work. Wilbur was born in Millville, Indiana; Orville in Dayton, Ohio. They were the sons of a bishop of the Evangelical United Brethren Church. Both completed high school courses, but neither graduated formally.

As youngsters, they read many technical articles and books in their spare time. They also were deeply interested in the idea of mechanical flight and read about Otto Lilienthal's successful gliding experiments in Germany. In 1893 the brothers opened a shop for the sale, repair, and manufacture of bicycles. Income from the shop supported them during the early years of their aeronautical experiments. From their studies and observations, the brothers theoretically solved the problem of lateral stability. They then built their first machine in 1899, a biplane kite, which they fitted with wings that could be mechanically twisted.

Before attempting a powered flight, they decided to master gliding and built three biplane gliders, which they flew at Kitty Hawk and Kill Devil Hills on the Outer Banks of North Carolina. They completed their first powered machine, the Kitty Hawk, in 1903, and made history's first powered, sustained and controlled airplane flights from level ground without assistance at takeoff on the morning of December 17, 1903.

This first plane had a 12-horsepower engine running at 1,200 rpm and weighing 170 pounds. It also had propellers designed by the Wrights which exceeded their theoretical calculations.

After the first flight, the Wright brothers conducted further experiments in Dayton. By the end of 1904, they could stay in the air for five minutes, and in 1905, they sustained flight for over 24 miles.

In 1908 they were able to conclude an agreement for production of the Wright airplane for the U.S. Army. Wilbur made the first public flight on August 8, 1908 in France and continued his exhibition flights there to the end of that year, establishing many distance and altitude records.

Both the brothers died bachelors; aviation had been their only passion. In 1948, the original Wright plane was put on display at the Smithsonian Institution in Washington, D.C. It serves to emphasize the fact that the Wright brothers were true aviation pioneers, bridging the gap between downhill gliding flight and sustained power flight.