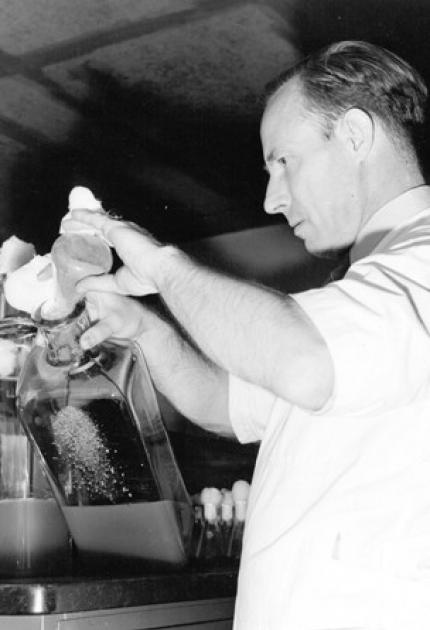 Method for Production of Penicillin

Andrew J. Moyer's discoveries provided the foundation for the industrial production of penicillin. Born in Star City, Indiana, Moyer received his A.B. degree from Wabash College in 1922 and his M.S. from North Dakota Agricultural College in 1925.

In 1929 he was awarded his Ph.D. in plant pathology from the University of Maryland. Moyer was employed as a mycologist with the U.S. Department of Agriculture, then worked as a microbiologist at the USDA Northern Regional Research Laboratory in Peoria, Illinois, until his retirement in 1957.

The potential of using penicillin to treat wounded soldiers was immediately recognized in World War II. However, a practical method for large-scale production was not available. The task was assigned to Moyer, who found that by culturing the Penicillium mold in a culture broth of corn steep liquor and lactose, penicillin yields could be increased. This was the first known use of corn steep liquor for growing microorganisms.

Moyer also discovered that with this medium, the fermentation could be conducted with continuous shaking, even further enhancing the yields and production rate. These discoveries led to industrial penicillin production, which saved thousands of lives during the war. Moyer's work also provided a model for the development of all other antibiotic fermentations.