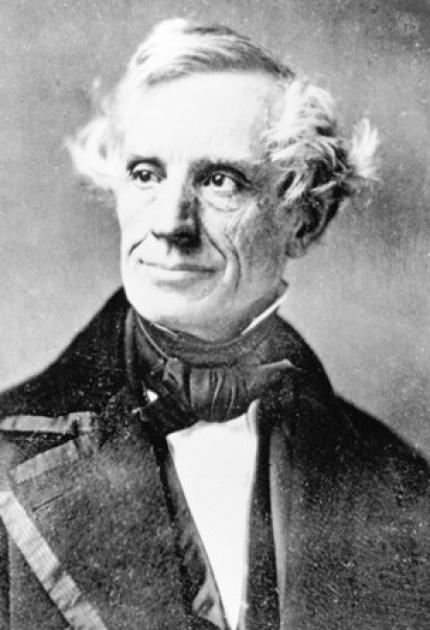 Samuel F.B. Morse, once a portrait painter, turned to inventing to make his fortune. Morse had little training in electricity but realized that pulses of electrical current could convey information over wires.

Born in Charlestown, Massachusetts, the eldest child of the Reverend Jedidiah Morse and his wife, Elizabeth Ann Breese, Samuel Morse attended Phillips Academy in Andover, Massachusetts, and entered Yale College in 1805, graduating in 1810. Morse took out three patents on pumps in 1817 with his brother, Sidney Edwards Morse. Samuel Morse's interest in telegraphy began in 1832, and the elements of a relay system were worked out late in 1835. The equipment was gradually improved and was demonstrated in 1837. Morse developed "lightning wires" and "Morse code," an electronic alphabet that could carry messages. The patent was applied for in 1840. A line was constructed between Baltimore and Washington, D.C. and the first message, sent on May 24, 1844, was "What hath God wrought!"

To support himself later in life Morse was largely dependent on dividends from telegraph companies. In 1858 several European countries combined to pay a gratuity of 400,000 francs as compensation for their use of his system. In 1861 the two coasts of the United States were linked by telegraph.