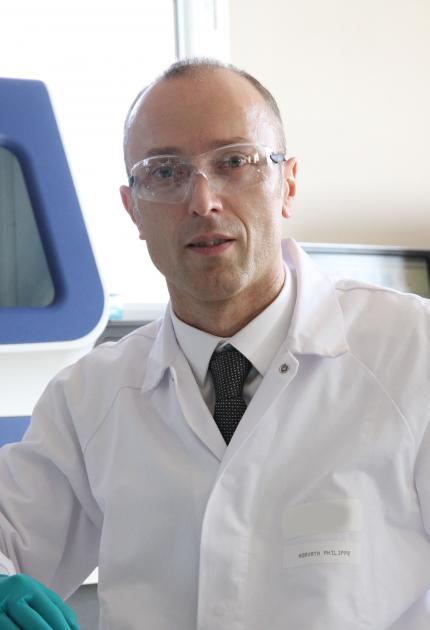 Born in Colmar, France, Horvath had an early interest in engaging in hands-on investigation to understand how things work. “I love to say that I grew up with a screwdriver in one hand and a hammer in the other one,” he said.

Horvath studied cellular and molecular biology, earning his master’s degree in 1996 and his doctorate in 2000 from the Université Louis Pasteur, which has since been absorbed by the University of Strasbourg.

In the early 2000s, Horvath and Barrangou began researching the genetic underpinnings of beneficial bacteria, or starters, used to produce fermented dairy foods. At Danisco, an industrial biotechnology company acquired first by DuPont and then by International Flavors & Fragrances (IFF), they studied how bacteria survive to viruses called bacteriophages. Phage attacks infect and kill bacteria and can result in expensive wastage. In 2005, while working to breed bacteria with natural resistance to these viruses, they identified similarities between viral DNA sequences and the spacer sequences in bacterial CRISPR regions.

Horvath and Barrangou discovered that bacterial genomes evolve over time, picking up sequences from bacteriophages to which they were exposed, then using these spacers to recognize viruses that later invade their cells. Further research showed that bacterial CRISPR spacers created a permanent record of viruses against which the bacteria has mounted defenses, passing it along to subsequent generations. They also showed that by altering CRISPR sequences, scientists can provide, withdraw or switch resistance against phages.

Their work catalyzed the exploration of CRISPR systems, leading ultimately to the development of the CRISPR-Cas toolkit for targeted DNA edits and laying the foundation for technology applied in areas including genome editing, plant breeding, and antibacterial and antimicrobial production.

In an interview with the National Inventors Hall of Fame®, Horvath emphasized the importance of teamwork. He noted the work of Christophe Fremaux and Dennis Romero in particular, stating “There are other co-inventors on the patents, and some had significant contributions to those discoveries, to the patents, to the publications we did.”

In 2011, DuPont began commercializing improved starter cultures, selecting those with CRISPR sequences for increased virus resistance. Since then, hundreds of millions across the globe have consumed cheese and yogurt with CRISPR enhancement.

“I think the work we did on CRISPR was the most important discovery we made,” Horvath said. “I'm involved in many different patents and inventions, but we have a portfolio around CRISPR, and this is the most valuable, I would say, in terms of what biotechnology can provide to the world.”

Today, Horvath is senior scientist and technical fellow at IFF in France. His honors include the Massry Prize in 2015, the Warren Alpert Foundation Prize in 2016, the Canada Gairdner International Award in 2016, and the Franklin Institute Bower Award and Prize for Achievement in Science in 2018. He holds 19 U.S. patents.

10 Things You Need to Know About Philippe Horvath>>>