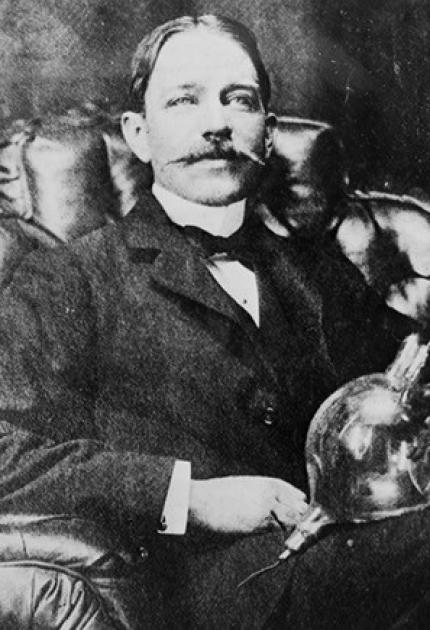 Peter Cooper Hewitt patented the mercury vapor lamp which was widely used for street and outdoor lighting. A graduate of Columbia University, he was experimenting with electric conductivity and was able to prove that a gas can conduct an electrical charge. By doing this, he was able to pass an electric current through mercury gas sealed in a quartz tube. His invention is a prototype of today's modern fluorescent lights.

The incandescent lamps that were being used in the 1890s converted only 5% of the energy used into light and converted the other 95% to heat. To address this problem, Hewitt created a discharge lamp in which mercury vapor was heated by the current passing through it. The efficiency was much higher than incandescent lamps but the emitted light was of a bluish-green unpleasant color, which limited its use. Hewitt continued work on his vapor lamp and soon discovered he could balance the light by adding elements to the vapor and a transformer that stepped up the current and excited the new elements.

Hewitt went on to serve on the newly formed Inventor's Guild in New York City created in 1890 to further the interests and secure the rights of those who made contributions in the fields of science and technology.