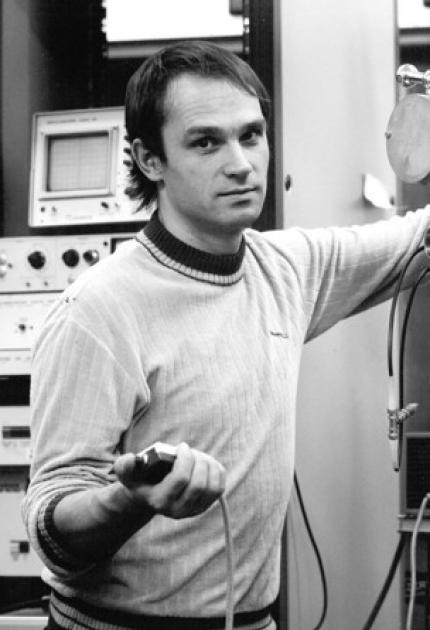 Gerd Karl Binnig and Heinrich Rohrer based their scanning tunneling microscope (STM) on a principle of quantum mechanics which allows the surface of a sample to be viewed atom by atom, magnified 100 million times. The STM consists of two parts, suspended from springs, within a stainless steel frame; the innermost part contains the microscope mechanism. A needle-sharp stylus is kept at a critically controlled constant distance from the surface of a sample. The electrons at the probe's tip disappear and reappear on the sample's surface, creating a minute electrical current (tunneling). To get high-resolution images of the structures, the microscope is shielded with copper plates and magnets from small vibrations.

It was introduced in 1981, and by 1989, there was a large growth in the number of STM's because of the number of applications, such as in the fields of silicon wafers, disks, and optical products manufacturing.

Binnig was born in Frankfurt, West Germany, and received his Ph.D. from Johann Wolfgang Goethe University of Frankfurt in 1978. The same year, he joined the IBM Zurich Division's Research Laboratory and began work on the scanning tunneling microscope. In 1986, Binnig and Rohrer were awarded the Nobel Prize for Physics.