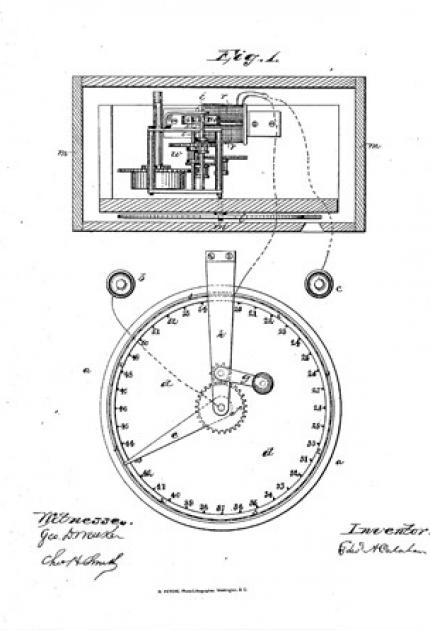 Edward Calahan invented the stock ticker in 1863, enabling quotes for stocks, bonds, and commodities to be transmitted directly from exchange floors to brokers and investors across the country. The New York Stock Exchange (NYSE) was one of the first to use the new device.

Calahan was born in Boston, Massachusetts. Wanting to be part of a modern business, he left school at age eleven and became a telegrapher for the firm that later became the Western Union Company. While he was working as chief telegrapher in Western Union's New York office, a chance encounter with a group of rushing messenger boys near one of New York's many exchanges inspired him to improve exchange communications. Before Calahan's invention, messengers ran price updates from exchange floors to brokers' offices. With the stock ticker, exchanges could telegraphically transmit the name and price of every stock sold. Broader communications capabilities allowed the NYSE to centralize order flow and improve liquidity, spurring its growth and consolidating business that had been scattered among many local exchanges.

Calahan, working with George B. Field, also invented the pneumatic telegraph system, the first telecommunications system that allowed communication from a central station to multiple points within a district.