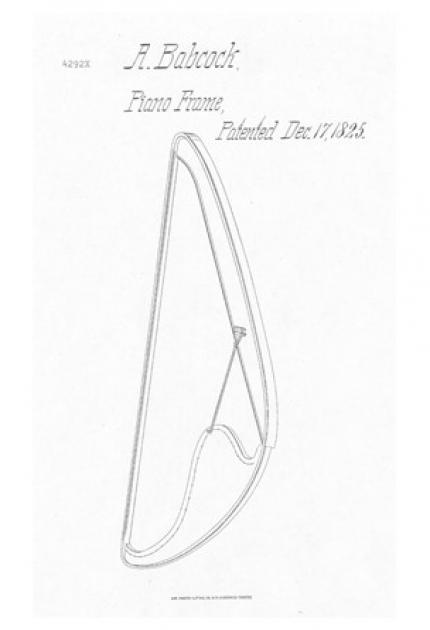 The dominance of the American piano industry rested on a key innovation patented by piano builder Alpheus Babcock in 1825. Babcock was the first to develop a one-piece cast iron frame to hold piano strings under tension.

Born in Dorchester, Massachusetts, Babcock was the son of a music teacher. He apprenticed as a piano maker and entered into a partnership with his brother making pianos in Boston by 1810. Through a variety of short-lived companies and partnerships in Boston, Babcock made a reputation for himself as an expert, known for pianos of excellent tone and finish.

Prior to Babcock's design, pianos were made almost entirely from wood. The problem with wood as a material for pianos was two-fold. Its structural weakness prevented high-tension, high-strength strings, which limited the sound a piano could produce. Wood also expanded and contracted in response to temperature and humidity, which de-tuned the piano. Babcock's strong cast-iron frame held big strings made from steel in high tension, permitting bigger and louder instruments, and the iron suffered far less from variations induced by temperature and humidity.

The true dominance of American iron-framed pianos occurred after 1850, when other manufacturers, such as Steinway, utilized an iron frame based on Babcock's design.