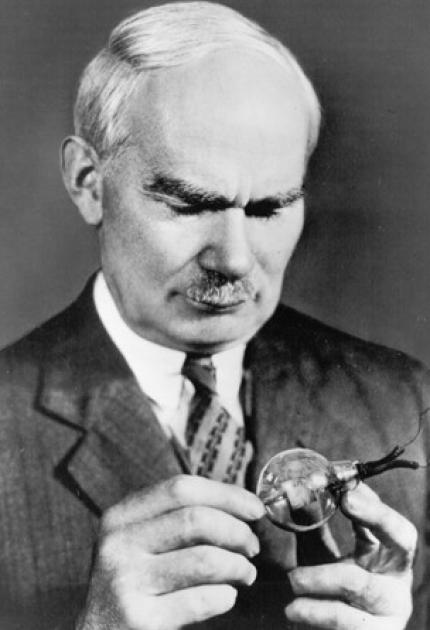 In the early 1900s, the great requirement for further development of radio was an efficient and delicate detector of electromagnetic radiation. Lee de Forest provided that detector.

Born at Council Bluffs, Iowa, de Forest at an early age exhibited the inventive talents that were to make him famous. His father sent him to the Mt. Hermon (Massachusetts) School for Boys and from there he entered Yale University. While in college, he continued to invent an improved typebar movement for his typewriter, an improved compass joint, a "puzzle game" all to help defray his expenses. After receiving his B.S., he continued his studies at Yale and received his Ph.D. in 1899.

De Forest's doctorate thesis was on the "Reflection of Hertzian Waves from the Ends of Parallel Wires"; thus began his long career in radio. De Forest found a clue to creating the long-sought detector of electromagnetic radiation in John A. Fleming's invention of the so-called electronic valve. The most serious drawback of the Fleming valve was that it was relatively insensitive to changes in the intensity of incident electromagnetic radiation. Moreover, the Fleming valve could act only as a rectifier, not an amplifier.

De Forest's simple but revolutionary answer was to insert a third electrode between the cathode and the anode. The audion amplifier was the most important of de Forest's more than 300 patents.