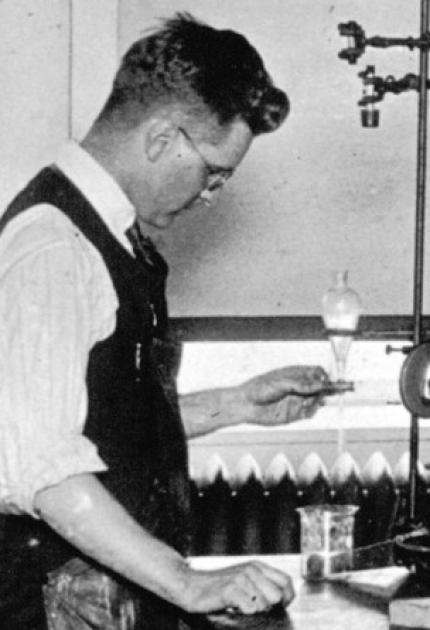 Ernest H. Volwiler, working with Donalee Tabern at Abbott Laboratories, discovered the general anesthetic Pentothal which has since played an outstanding role in improving the well-being of generations of patients. Born in Hamilton, Ohio, Volwiler attended Miami University of Ohio and received his A.B. in 1914. In 1916 he received an M.A. from the University of Illinois, followed by a Ph.D. in 1918. After earning his Ph.D., Volwiler joined Abbott Laboratories as a researcher.

After holding a number of positions, including director of research and president, he became chairman of the board of Abbott Laboratories International in 1959. Volwiler and Tabern discovered Pentothal in 1936 when seeking a substance which could be injected directly into the blood stream to produce unconsciousness. For three years the two men screened over 200 compounds, eventually arriving at a sulfur-bearing analogue of Nembutal. Induction was smooth, pleasant, free of muscle twitching, and notably lacking in delirium or frightening psychic effects. It could be used for minor procedures or for more prolonged procedures by being administered before ether.

Even today, Pentothal is the agent of choice all over the world for operations and related procedures.