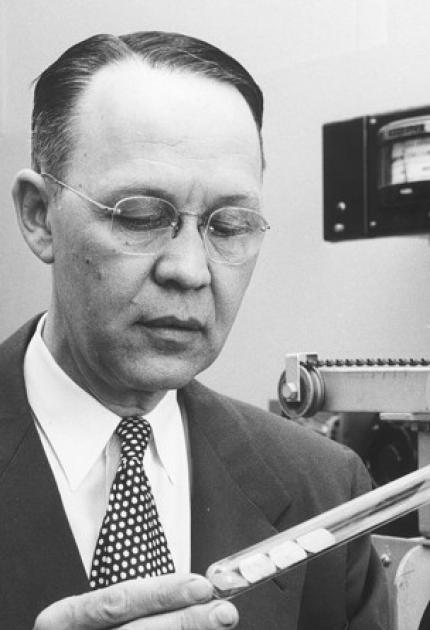 Chemist Calvin Fuller co-invented the silicon solar cell with physicists Daryl Chapin and Gerald Pearson. Building on Albert Einstein's theories about the photoelectric effect, the three scientists' solar battery has powered everything from the space program to the Internet.

Born in Chicago, Fuller received his B.S. and Ph.D. degrees in physical chemistry from the University of Chicago. He joined Bell Labs in 1930, where his work included research in organic insulating materials and investigations of the molecular nature of polymers. Beginning in 1948, Fuller's research focused on semiconductors and the development of semiconductor devices. His work yielded a method of diffusing impurities into the surface of a silicon wafer, a technique fundamental to producing the solar battery and other silicon devices.

The solar cell is composed of an array of thin silicon wafers that contain minute traces of boron, which creates electrical charges when stimulated by light. The solar cell helped advance the space program by allowing space vehicles to utilize readily-available sunlight. And, reversing the cell's process and converting electrical signal into light allows data to be carried via the fiber optic lines that transmit information across the Internet.