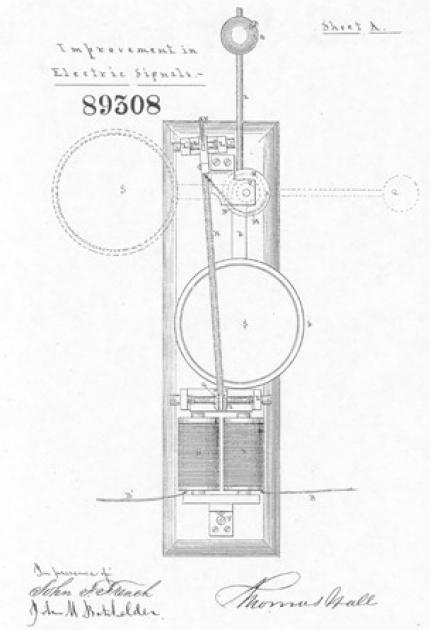 The 1860s and 1870s were pivotal decades for improving safety in the railroad industry. Many of these innovations were invented by Thomas Seavey Hall.

Born in Upper Bartlett, New Hampshire, Hall attended Middlebury College. In 1886, he witnessed a train accident that occurred from a misplaced switch. In response, Hall set out to invent improved signals that would better alert train engineers to the presence of oncoming trains, as well as alerting travelers crossing railroad intersections. His first patent was designed to alert employees of station homes to an improperly placed switch. The system was designed to produce an alarm that would sound continuously in case a switch was not properly placed.

In 1869, Hall was issued a patent for a banjo signal that would become essential to railroad safety. Unlike his earlier patent, the banjo switch was designed to alert a train engineer of the presence of another train on a stretch of track by using electromagnetism to display a sign shaped like a banjo. While the concept of the banjo signal was successful, it tended to malfunction in inclement weather. This precipitated Hall to redesign his signal, encasing it in a watertight enclosure to ensure proper functioning in ice and snow.