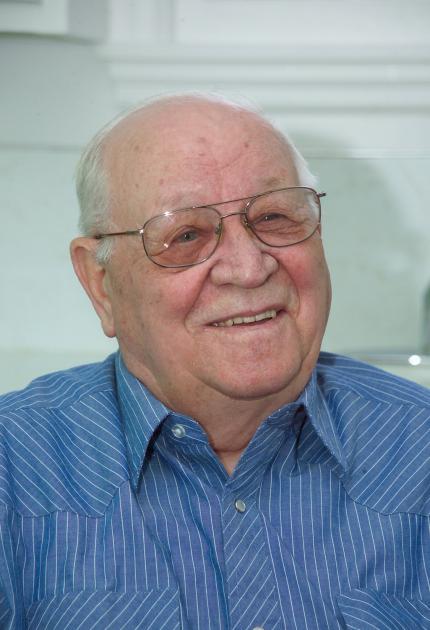 Born in Tenney, Minnesota, Louis Keller served as a staff sergeant in the U.S. Army in World War II. Though he had no formal education beyond the eighth grade, his exceptional ingenuity led him to earn six U.S. patents and make a lasting, global impact.

In 1947, Louis Keller started Keller Welding in Rothsay, Minnesota, and in 1953, his brother Cyril joined the growing business. When a local farmer needed a light and easily maneuverable machine to clear his turkey barn of manure, the Kellers designed and built a solution in just six weeks. Using mechanical parts from local junkyards and bars from the old Rothsay jail for the manure fork teeth, they created the first small, lightweight, three-wheel front-end loader in 1957.

The loader caught the attention of the Melroe Manufacturing Company in 1958, and the brothers were invited to exhibit their invention at the company’s booth at the Minnesota State Fair. Melroe was later awarded exclusive manufacturing rights on a royalty basis. The manufacturing contract also required the Kellers to become Melroe employees. The brothers sold their business and continued to develop their invention for Melroe.

The Keller Self-Propelled Loader introduced compact machines that could maneuver in small or complicated spaces and be transported easily from site to site. The original loader featured a front bucket, hydraulic foot pedals, a rear motor, two front wheels, a pivoting rear caster wheel that enabled sharp turns, and a belt-and-chain drive system. The Kellers later replaced the belts with their patented clutch system, added a counterweight in the back for stability, and designed attachments including a snow blower, sweeper, bucket and manure fork.

The caster wheel had difficulty turning on soft ground, so the brothers brainstormed a solution, which Louis Keller developed. He replaced the single rear caster wheel with two rear-drive wheels.

In 1960, a four-wheel, skid-steer design, where the wheels skid for directional control, was introduced as the M400. However, it bore equal weight on the front and back wheels, so it was hard to steer. In 1962, the M440 was introduced and dubbed the “Bobcat.” Seventy percent of its weight was in the rear when the bucket was empty, and an equal amount was in the front when the bucket was full, which increased its skid-steer maneuverability.

Today, compact loaders are ubiquitous at construction sites and on farms, railyards and seaports. More than 1 million Bobcat skid-steer loaders have been built and sold worldwide, and in 2007, South Korea’s Doosan Group purchased Bobcat from Ingersoll-Rand for $4.9 billion.

In addition to the skid-steer loader, Louis Keller also patented steel over-the-tire tracks for wheeled vehicles that were manufactured and sold worldwide by Loegering Manufacturing in Casselton, North Dakota. In 2004 Loegering was sold to ASV, which continues to sell the tracks.

The American Society of Agricultural and Biological Engineers recognized the Kellers’ skid-steer loader as a Historic Landmark in 2004. Louis and Cyril Keller were inducted into the Association of Equipment Manufacturers Hall of Fame in 1999 and the Minnesota Inventors Hall of Fame in 2004.

10 Things You Need to Know About Louis Keller>>>