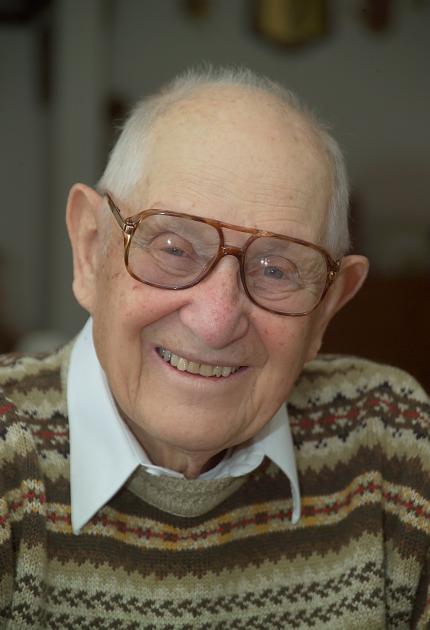 Brothers Cyril and Louis Keller played a key role in launching the compact equipment industry in the late 1950s and early 1960s with their invention of the world’s first compact loader, which became the Bobcat® skid-steer loader.

Cyril Keller was born in Tintah, Minnesota, and served in the U.S. Navy in World War II. Despite having no formal schooling beyond the eighth grade, he held six U.S. patents and made a lasting, worldwide impact with his resourcefulness and drive to invent.

The Keller brothers understood that one of the disadvantages of early motorized loaders, which used steering wheels and gearshifts, was that with all wheels turning in the same direction, operating them in small spaces was nearly impossible because they required a wide area for turning around. In 1956, when a local farmer needed a machine that could clear his turkey barn of manure and be light enough to operate on the second floor, the Kellers designed and built a solution.

In just six weeks, they created the first small, lightweight, three-wheel front-end loader in their machine shop in Rothsay, Minnesota, using mechanical parts from local junkyards and bars from the old Rothsay jail for the manure fork teeth.

The Keller Self-Propelled Loader had a bucket in the front, which was operated using hydraulic foot pedals, and a motor in the back. It had two front tires, and the rear wheel was a pivoting caster that enabled sharp turns.

The Kellers’ patented clutch system, operated with two hand levers, made it possible to put one side of the loader into forward and the other side into reverse, without the use of a transmission gearshift or a steering wheel. The loader could turn completely around in a circle the size of its own length, with one front wheel moving forward and the other moving in reverse, pivoting around the caster wheel.

After a very successful demonstration week at the 1958 Minnesota State Fair, Melroe Manufacturing Company, a farm equipment company, was awarded exclusive manufacturing rights to the loader on a royalty basis. The manufacturing contract also required the Kellers to become Melroe employees so they could continue to develop their invention.

The first four-wheel skid-steer loader was introduced in 1960 as the M400. Having a second axle made the M400 a four-wheel drive vehicle, as well as the first machine that required the wheels to skid for directional control, or skid steer. The M440, the first model with the Bobcat name, entered the market in 1962 and offered enhanced maneuverability and enhanced bucket control.

Over the next several years, Cyril Keller set up dealerships throughout the United States and in Europe. He later ran a school training new dealers in operating the Bobcat.

In 1969, Clark Equipment Co. purchased Melroe’s agricultural products business for about $36 million. Ingersoll-Rand took over Clark in 1995, and in 2007 sold Bobcat for $4.9 billion to South Korea’s Doosan Group.

More than 1 million Bobcat skid-steer loaders have been sold worldwide and are used at construction sites, farms, railyards and seaports. In 2004, the American Society of Agricultural and Biological Engineers recognized the Kellers’ skid-steer loader as a Historic Landmark. Cyril and Louis Keller were inducted into the Association of Equipment Manufacturers Hall of Fame in 1999 and the Minnesota Inventors Hall of Fame in 2004.

10 Things You Need to Know About Cyril Keller>>>