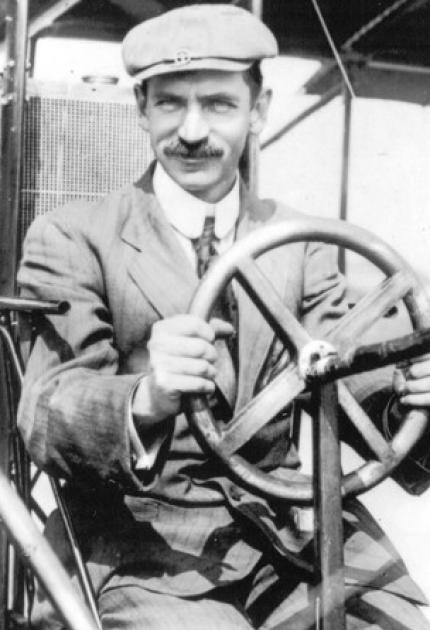 Glenn Curtiss influenced every field of aeronautics. He holds 72 patents, including designs for dirigibles, aeroplanes, flying boats, commercial aircraft, and Navy planes. Curtiss built one of the first flying machines to land in water and founded one of the first companies created specifically for manufacturing airplanes.

Curtiss was born in Hammondsport, New York and opened a motorcycle shop in 1901. Respected for his quality motorcycle engines, Curtiss built the engine for the California Arrow, the first successful dirigible in America. He also worked for Alexander Graham Bell in the Aerial Experiment Association, designing the June Bug. It included ailerons a device controlling the lateral balance of an airplane making the Wright's wing-warping obsolete. In 1911, Curtiss designed a seaplane for the Navy, adding retractable landing gear to his design. By the start of World War I, Curtiss was the largest American aircraft manufacturer. His most famous design was the Jenny, which was primarily a military training aircraft for WWI and later used for barnstorming and mail delivery.

Glenn Curtiss is considered the most influential man in the evolution of aviation. His keen insight into aeronautics and aviation, despite having no formal education past eighth grade, affirms his genius. He holds the Collier Trophy and the Langley Medal.