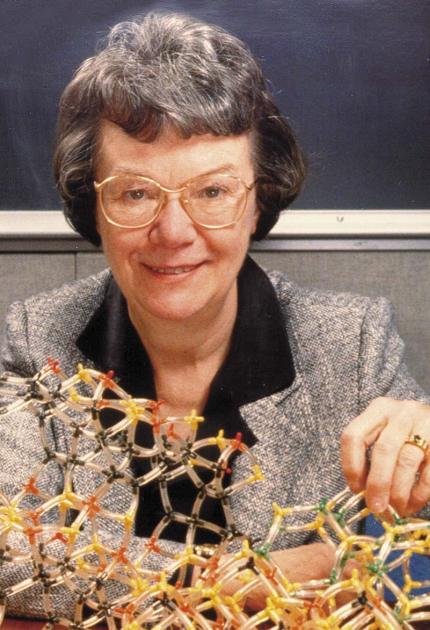 Edith Flanigen invented molecular sieves, or zeolites, manufacturing compounds that have made a critical impact in the petroleum and petrochemical refining industries and have improved the manufacture of products from gasoline to laundry detergent.

Flanigen was born in Buffalo, New York. She has said that like her father, she has always had an innate and insatiable curiosity. A high school chemistry teacher helped to spark her interest in chemistry, and in 1950, she earned a bachelor’s degree in this subject from Buffalo’s D'Youville College. Then in 1952, she earned her master’s degree in inorganic-physical chemistry from Syracuse University.

Also in 1952, Flanigen took a position as a research chemist with Union Carbide in Tonawanda, New York. Here, she was tasked with identifying, extracting and purifying a variety of silicone polymers. She worked in the same division as her two sisters, Joan and Jane, who had also earned degrees in chemistry at D’Youville.

Flanigen began working on the emerging technology of molecular sieves, crystalline microporous structures with large internal void volumes and molecular-sized pores, in 1956. These compounds can be used to sort, separate and purify complex chemical mixtures based on the size of their particles. They can also catalyze or speed the rate of hydrocarbon reactions.

During her 42-year career at Union Carbide and UOP, Flanigen invented or co-invented more than 200 novel synthetic materials and made substantial contributions to the product development of zeolite Y, an aluminosilicate sieve that can be used to optimize the conversion of crude oil into gasoline and make oil refining more efficient, cleaner and safer. Flanigen’s work with molecular sieves also has led to innovative applications in water purification and environmental cleanup, including decontaminating water at Japan’s Fukushima Daiichi nuclear power plant.

“Good ideas are even better ideas when they can improve people’s lives and help the Earth,” she said in an interview with the National Inventors Hall of Fame® (NIHF).

Flanigen also developed a hydrothermal emerald synthesis process and pioneered the use of mid-infrared spectroscopy for analyzing zeolite structures.

In 1992, she became the first woman to be awarded the Perkin Medal, America's top honor in applied chemistry, and in 2012, she was awarded the National Medal of Technology and Innovation. She holds 109 U.S. patents.

Since her induction into NIHF, Flanigen has inspired young innovators involved in NIHF programs and events, serving as a Judge for the Collegiate Inventors Competition® and making visits to Camp Invention® program sites.

When asked about her long and impactful career, Flanigen shared, “It’s been very satisfying because for all of my career, our task, our focus was to discover new materials. And when you’re discovering new materials that have never existed before, it is really a great delight.”