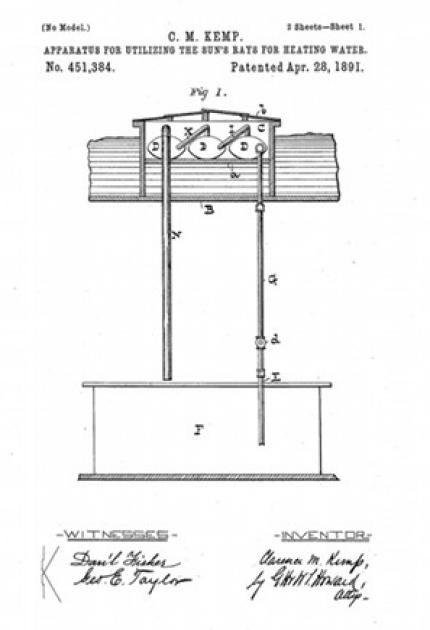 In 1881, Clarence Kemp founded the C.M. Kemp Manufacturing Company in Baltimore to manufacture many products of his own design, including valves, motors, and equipment for utilizing acetylene. In 1891, Kemp patented a commercial solar water heater that he called the Climax system. During this time many people secured hot bathwater using a "wet-back" wood stove or range in which water was heated via a coiled pipe that passed through the stove. Kemp thought it unpleasant to heat up the stove during the hot Maryland summers.

Instead, his invention consisted of three tanks mounted in a frame under glass on the south side of the roof of a house. The tanks were filled with cold water from the water mains, heated by the sun, and then used for bathing or other purposes. By enclosing the tanks in the frame, Kemp ensured the tanks were somewhat insulated and didn't lose heat to the wind. Today's modern passive solar water heaters follow Kemp's basic design. In 1895, Kemp sold the exclusive manufacturing rights of the heater system to two Pasadena businessmen who found the sunny climate of southern California a more promising market.