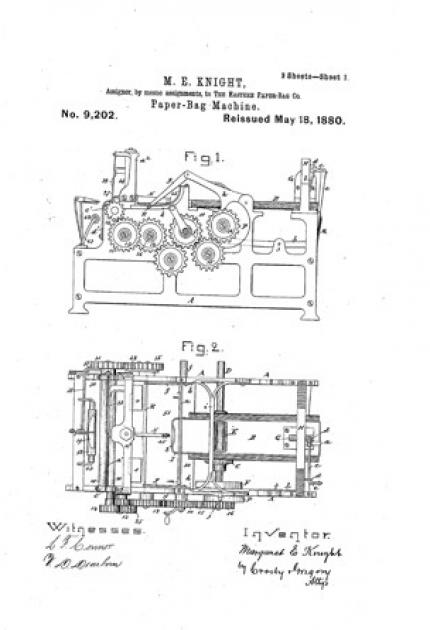 Margaret Knight invented a machine that could automatically cut, fold, and glue flat-bottomed paper bags. Knight's invention revolutionized the paper bag industry by replacing the work of thirty people with one machine.

Born in York, Maine, Knight went to work in a New Hampshire textile mill following her father's death when she was still a child. After witnessing a serious accident caused by a malfunctioning loom, Knight was inspired to create her first invention, a safety device that became a standard fixture on looms. That device was the first of many technical innovations that would touch a wide range of industries.

Knight founded the Eastern Paper Bag Company in Hartford, Connecticut. Between 1870 and 1915, the inventor was granted patents for at least twenty-six inventions, ranging from a window frame, to a sole-cutting machine for shoemaking, to a compound rotary engine.