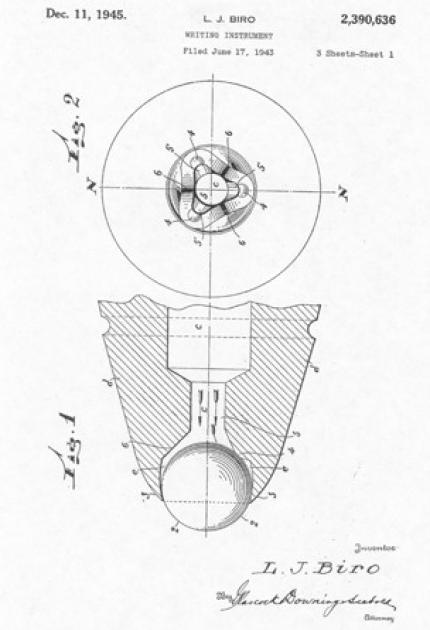 A native of Budapest, Hungary, Biro was working as a journalist when he noticed a fundamental difference between two types of ink. Ink for fountain pens was easy to smudge because it needed time to dry, yet ink used in newspaper printing presses dried much faster, leaving dry paper with a smudge-free product. He tried using the newspaper printing ink in a fountain pen but found it was too thick to flow through the tip.

Needing a way to combine the qualities of both inks, Biro worked to perfect the design. It consisted of a ball that freely rotated in a socket. Moving the pen across the page made the ball rotate, where it picked up ink from a reservoir and applied it to the page. The Biro pen was the first successful ballpoint writing instrument.

His pen came to the attention of a British clerk who thought the pen would be useful to airplane navigators because it was not dependent on pressure for ink distribution, working well at high altitudes. The British government bought Biro's patent and had the pens made for the Royal Air Force. From this, Biro's pen quickly gained commercial success.