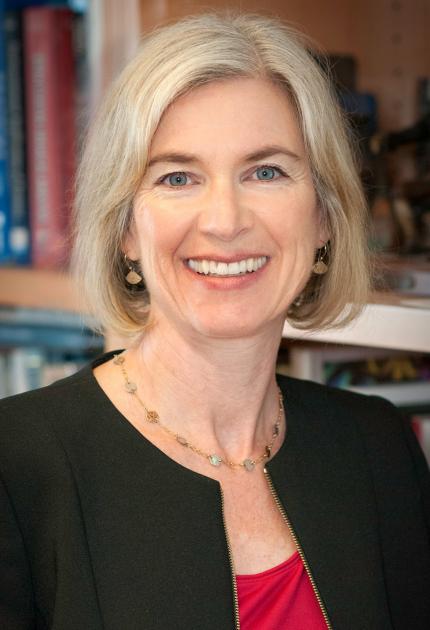 Doudna was born in Washington, D.C., and during her childhood, her family moved to Michigan and then to Hawaii. Her parents as well as her teachers encouraged her curiosity. “I loved the process of discovery,” Doudna said. “What if I could become a scientist who worked on discovering things about the natural world, maybe things no one had ever known before?”

She received her bachelor’s degree in biochemistry in 1985 from Pomona College, and her doctorate in biological chemistry and molecular pharmacology in 1989 from Harvard Medical School. Her postdoctoral research was completed at Harvard Medical School, Massachusetts General Hospital and the University of Colorado.

Doudna and Charpentier began collaborating in 2011. Until then, they had been researching different aspects of RNA and CRISPR (an immune system used by bacteria to fend off viruses) independently — Doudna at the University of California, Berkeley, and Charpentier at Umeå University in Sweden. Their partnership led to the 2012 discovery that Cas (CRISPR-associated) 9, a gene-cutting protein used by bacteria to kill viruses, can be re-engineered as a programmable gene editing tool.

“Studying how bacteria fight viral infections may sound like a niche area of biology, and it was,” said Doudna. “But this curiosity-driven research led in directions that none of us anticipated at the start of the project.”

Doudna and Charpentier described how an RNA molecule guides the CRISPR-Cas9 system, binding it to a specific region in the DNA, and showed how the Cas9 protein then cuts the DNA, allowing it to be edited in a precise manner. The CRISPR-Cas9 system is faster, more accurate and more efficient than previous genome editing methods. Laboratories worldwide have incorporated CRISPR-Cas9 into their research programs, creating a CRISPR revolution.

CRISPR has the potential to be transformative in medicine. It is being tested for treatment for genetic diseases, including sickle cell disease and other disorders caused by a mutation in a single gene, and scientists are using it to develop new diagnostic tests. The technology also is being explored to create crops that resist disease and are resilient to a changing climate.

Doudna has been with UC Berkeley since 2002, and she currently holds the Li Ka Shing Chancellor’s Chair in Biomedical and Health Sciences and is a professor in the departments of chemistry and of molecular and cell biology. She founded the Innovative Genomics Institute in 2014. To commercialize her CRISPR technologies, Doudna has founded several companies including Caribou Biosciences, Intellia Therapeutics, Mammoth Biosciences and Scribe Therapeutics. She holds more than 100 U.S. patents.

Doudna and Charpentier were awarded the Nobel Prize in Chemistry in 2020. They also have been named the winners of the Harvey Prize and the Wolf Prize in Medicine among their many additional honors.

10 Things You Need to Know About Jennifer Doudna>>>